The automotive industry is constantly evolving and improving. Car companies are devoted to continually enhancing car features and the situation is no different with headlights. The traditional halogen headlights are slowly giving way to new technologies — Xenon and Bi-Xenon lights. In this article, I decided to provide a detailed comparison of those two, to clarify the differences and help you make the right decision.

Essentially, there isn’t any major, fundamental difference between Xenon and bi-Xenon lights, as they both use the same technology. The only difference is the number of bulbs that are being used. A standard Xenon system uses 2 bulbs per headlight, while the bi-Xenon system uses a single bulb per headlight. While it’s basically the same technology, the number of bulbs still makes a big difference — I’ll explain why in a bit.

Xenon bulbs are also known as high-intensity discharge bulbs. They have been on the market since 1997 and are getting increasingly popular. Drivers simply love the bright, white light those bulbs produce. In fact, the light is so bright that it can easily blind the drivers coming your way. That is especially true when Xenon lights are used as high beams and it can be extremely dangerous.

Moreover, Xenon lights take a bit longer to power up. The delay takes only a few seconds, but when driving in low visibility or at night, a few seconds can make all the difference in the world.

The bright high beams and the delay when turning them on and off could put you and others in danger. Thus, manufacturers found a way around this problem by combining Xenon bulbs and halogen bulbs. That’s why most Xenon headlights use Xenon bulbs for low beams and halogen lights for high beams.

This solution minimizes the risk of blinding oncoming drivers while improving long-range visibility and safety on the road. The only downside to this solution is that you’ll end up with the combination of the white light Xenon bulbs and yellowish beams of halogen bulbs. It might not be as appealing to the eye, but safety comes first.

Now, let’s examine some of Xenon lights’ pros and cons. 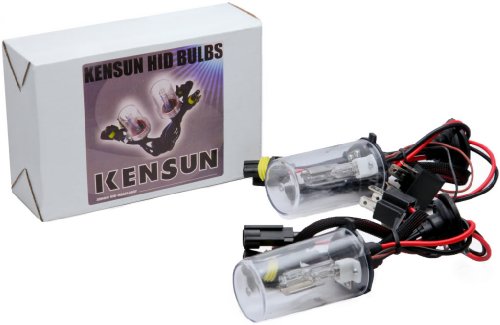 You should look at the Bi-Xenon system as an improved version of Xenon, because the manufacturer came up with it in an attempt to fix the issues in the original system. Although both systems essentially use Xenon lights, the Bi-Xenon system is more of a level-up. It brings a sense of refinement to the table.

Bi-Xenon headlights use a single pair of bulbs that perform functions of both low and high beams. This was made possible by introducing a mechanical system to the headlight in order to help direct the beam accordingly. The mechanical system operates in two different ways by being responsible for a few different things.

Namely, the system can move the bulb itself and point it upwards or downwards, as well as aim it appropriately. Also, it can serve to partially block or unblock bulbs. Furthermore, the mechanical system controls bulb reflectors, moving them vertically and sideways to shine an appropriate beam. Some cars have automatic reflectors that move sideways, depending on the direction in which you are turning. That allows higher visibility with just a turning of a lever.

Bi-Xenon systems power up instantly. There’s no delay in switching from low to high beam and vice-versa. All it takes to make the change is a single flip of a switch, which overall means increased safety for you and drivers coming your way.

Ultimately, Bi-xenon technology aims to provide what Xenon technology can’t. Although it might be a modern, unexplored territory for some drivers, it’s got great potential and a bright future.

Let’s explore Bi-Xenon lights further in order to see how they compare to Xenon headlights.

Xenon vs. Bi-Xenon Headlight: The Choice Is Yours

After reading this article, it’s clear that both Xenon and bi-Xenon headlights have their advantages and disadvantages. It’s up to you to make a choice, and that will depend on your needs and your preferences. Here’s a short overview of their main features and differences to help you make the right choice:

In retrospect, bi-Xenon headlights might seem like a better option —  they are modern, beautiful, and highly efficient. In addition to that, they are less expensive to maintain, even though they are at greater risk of suffering a mechanical failure.

On the other hand, if you are fine with frequent changing of halogen bulbs and you happen to enjoy the warm, yellowish light they emit, then Xenon headlights are ideal for you.

The bottom line is that there really is no right or wrong answer.

Still, the things you should always keep in mind are your own safety and the safety of others around you. Furthermore, your allocated budget might also play a role in deciding which option to go for, as well as the specific needs of your car.

So do your research. Watch as many videos on the topic as you can find or ask friends who have either of the two systems to give you a test ride. You should explore your options and make sure you have the most effective headlights for the safest and most enjoyable driving experience. Once you decide which one best suits your needs, head over to a garage and get it installed.